PyAstroStack: Now with easier installation for Ubuntu 14.04 and Gentoo

Installing with python setup.py install is fairly easy but taking care of the dependencies can sometimes be ugly. I always wanted this program to be easy to install and now that's happening; for Gentoo and newest Ubuntu 14.04. 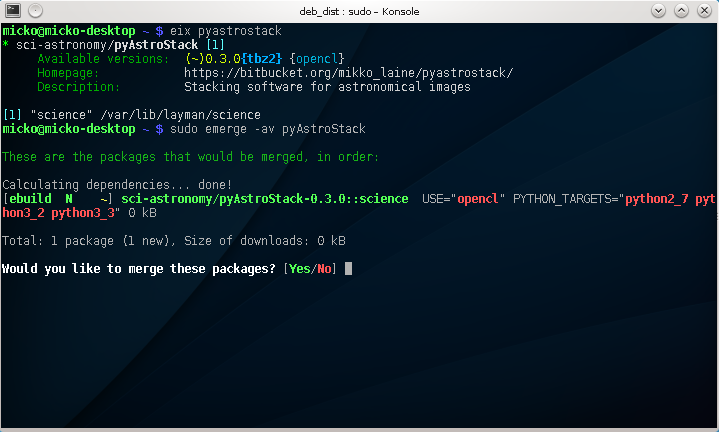 Most Gentoo users are familiar with layman, overlays and unmasking masked packages. For most, that's the reason to use Gentoo. Easy installation for almost everything. Stuff that isn't on Portage tree can be added for easy emerge with overlays and layman takes care of them. I wrote an ebuild for pyAstroStack and it was accepted in the science overlay.

If you're not that familiar with all that, this will probably help:

The --autounmask-write creates unmasking configurations and dispatch-conf or etc-update integrates them into /etc. This will install Python 2 and/or Python 3 versions according to your PYTHON_TARGETS variable in /etc/portage/make.conf.

I know there's Launchpad and apt-repository for community packages but I'm not there yet. Maybe soon, but for now there's only a .deb file to download and install.

First line will mark the package to install but the installation will fail due to missing dependencies. Second line fixes all that and installs everything required including the software itself.

Of course I'd like to support everything. The .deb I made does not necessarily require Ubuntu so it most likely will work on Mint and other Ubuntu derivatives. It also might work on Debian, but that's more uncertain. Debian specific package will be ready in near future.

Python's distutils support creating RPM's but I haven't tested those at all so I will not distribute them.

For everything else I recommend the python setup.py install line and manual installation of all the dependencies.
Posted by Unknown at 7:02 PM No comments:

pyAstroStack 0.3.0 - Lots of speedups and OpenCL no longer required

I released 0.2.1 just about a week ago and now I'm about to push 0.2.5 out. First the updates were indeed minor, but they grew and became quite important considering the whole program. After finishing 0.2.5 and hunting down its bugs I decided this version should be 0.3.0 instead.

Installation still requires Python-pip on Ubuntu 13.10, but I'm already targeting this on soon to be released 14.04. There might even be a deb-package or repository on Launchpad if I figure them out.

Here's a summary of changes:


Full list of changes in distribution package on in Git repository.

Posted by Unknown at 3:50 PM No comments: