I started my amateur astronomy (or "stargazing" as the word seems to be) in march 2012. That's when I got my first telescope: Skyliner dobson 8''. The rest of the spring went by learning the capabilities of the telescope, my place for observations (backyard) and of course, myself. I really hadn't gotten into planning my observations or looking ahead. The transit came by surprise.

And by surprise I mean two weeks of warning. I had just enough time to go buy Baader AstroSolar safety film and build a casing to attach it to my telescope. I had already made plans for the June 6th when the transit happened but instead of cancelling that, I just took the dobson with me. This was a very good decision because it was too cloudy to see anything where I live, but a quite good weather where I was.

Sun rose about 4 am and I did the same an hour earlier. I drove to the tallest hill I could think of in the area. I'm glad I scouted the area the day before so I knew where to take my car and where to carry my dobson. It's not too heavy to carry outside and back in when I'm at home but couple hundred meters uphill the 25 kg starts to feel a bit.

Got the telescope ready, got my camera ready (after panicking a while about cameras battery which wasn't in the camera... Found it in the backpack after all), sun had already risen but there were clouds blocking the view. Couple of minutes of aiming the telescope. I hadn't thought of this. While watching the Sun, I really can't use the finderscope for aiming.

When I finally got the Sun on ocular I immediately saw a black dot over Suns disc. There were still some clouds blocking the view but they disappeared quickly. I switched ocular for camera and took this: 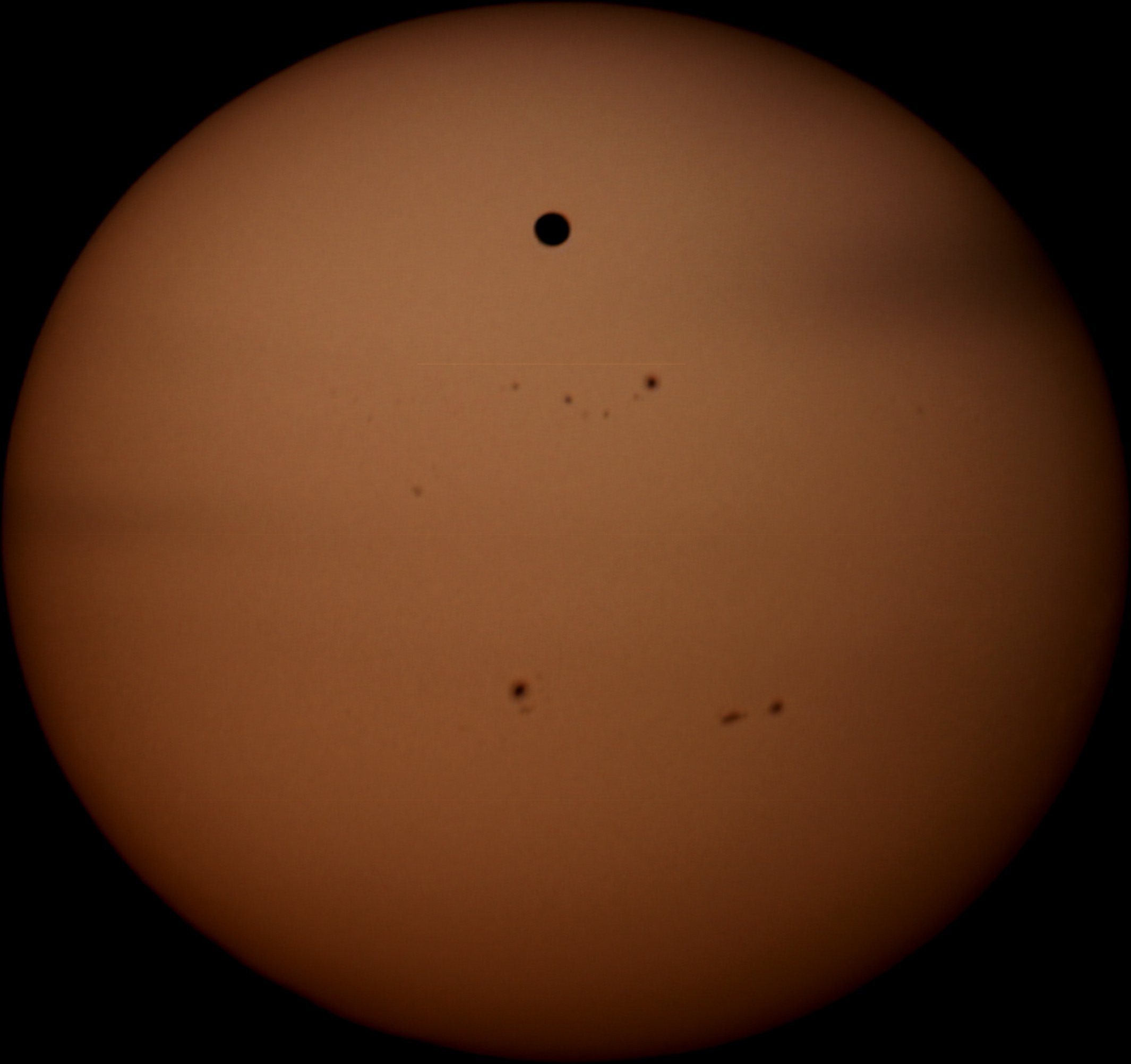 My first thoughts were that "Now I've seen it and even got a photo." Of course I wanted to see the rest 4 hours as well but it wouldn't matter too much if I didn't. Before 8 am (Finnish time, when the transit ended) it got cloudy several times but I stayed and waited for the sky to clear. It always did and I was able to take more photos and follow the end of the transit.

And here are some more pictures:

Some of the pictures are on Google+ but some only on low bandwidth server. I'm not sure about Google's terms and conditions... I really would like to use Google+ images more, but I also hate to give anyone rights to use my pictures.