Size of deep sky objects compared to the Moon

I wrote about this on some previous post, but I felt I'd have to get back to this. Most people, including me few years ago, don't realize how big all the galaxies and nebulae are in the sky. Most common example I've seen is the Andromeda galaxy.

Even if you could see it with naked eye (I've understood it's possible), it won't be more than a tiny smudge. But you won't need much of a camera to capture a lot more of it. Then you're starting to realize.

Here's a comparison of the Andromeda galaxy and the Moon. I took some photos of the Moon with a 200 mm lens, the same I use to photograph Andromeda. I then measured the size of the Moon and resampled a bigger photo (effective focal length 2400mm) to match that size. Resized Moon was then pasted next to Andromeda. 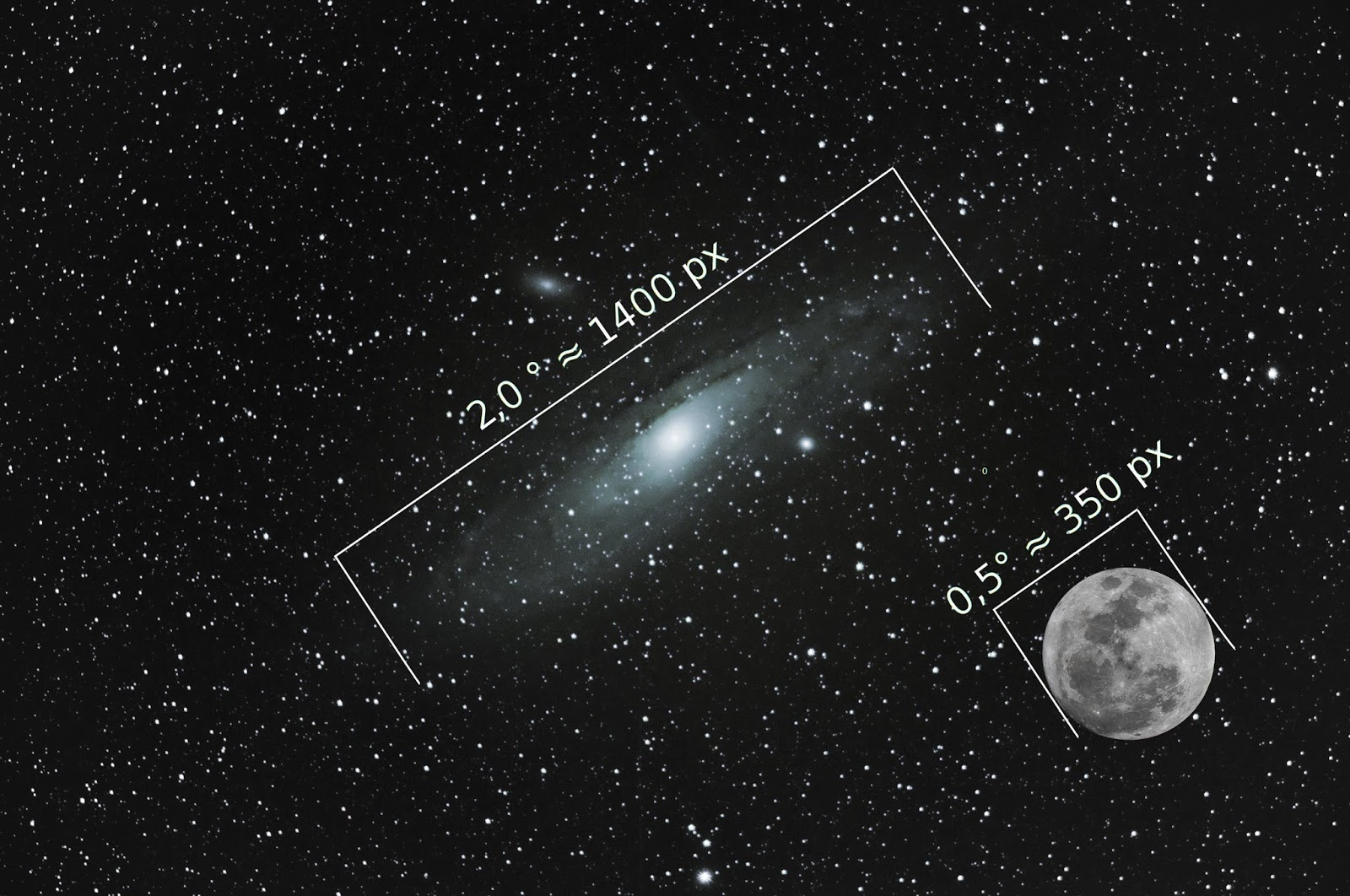 Wikipedia says the apparent size of Andromeda is 190' by 60'. 190 arc minutes is about 3.2 ° so a lot bigger than I measured from that photo. This is the amount I was able to catch on camera. (NOTE: I had mistakenly measured the size to 4.0 °. Now this is fixed.) Moon was on perigee when I took this so it should be about 30 arc minutes or 0.5 °

Here's another. Great Orion Nebula M42 with the Moon placed next to it. M42 is actually visible without any equipment almost everywhere. It's the Orion's Sword, three stars below Orion's Belt. From this photo you can see there's a bit more than three of them. The one on left is the top one on the sky. 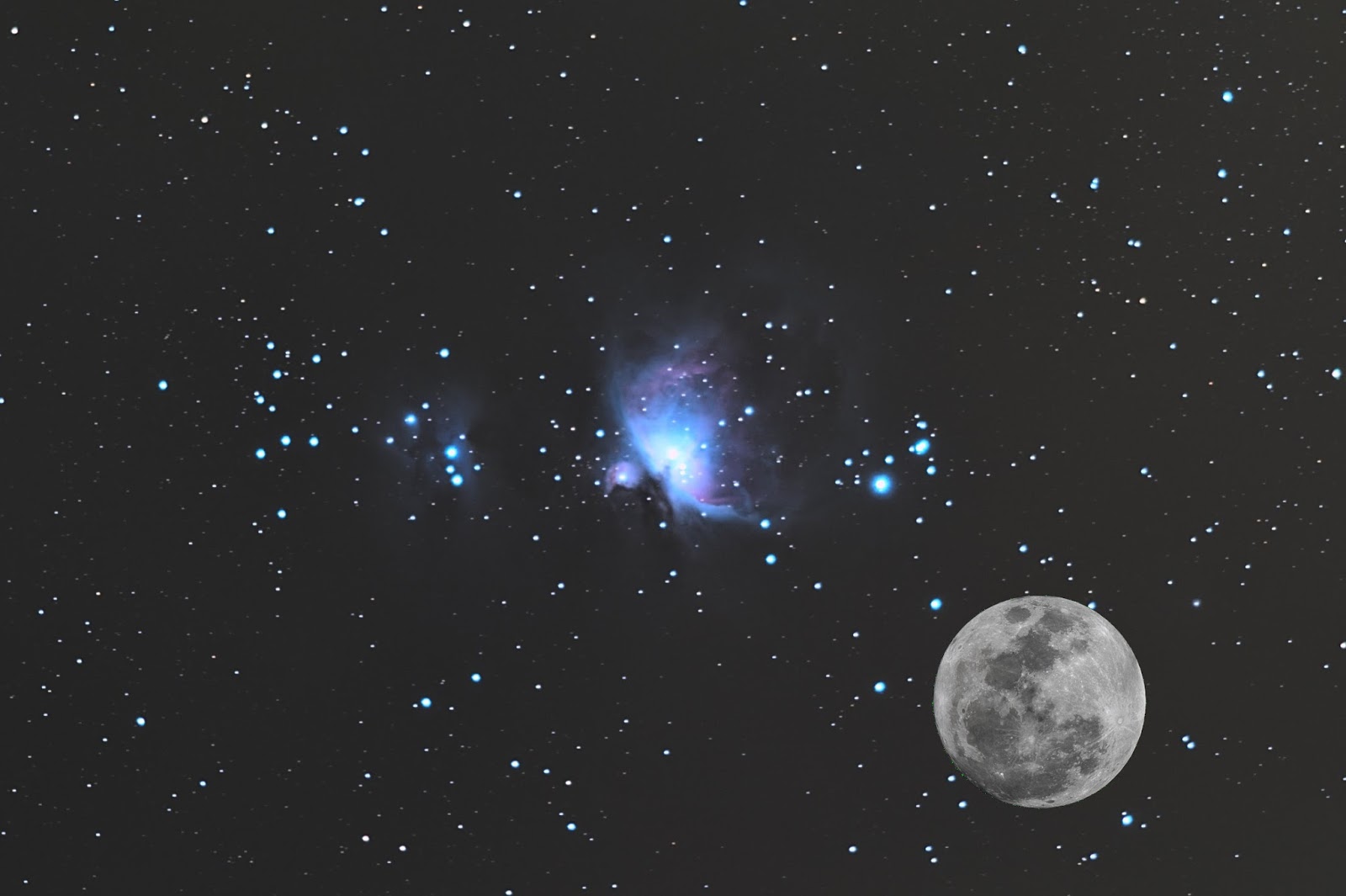 Now just imagine if you could see all those galaxies and nebulae with your naked eye.
Posted by Unknown at 1:15 PM No comments:

I still don't know much of the capabilities of my astrophotography set. As I've written before, I'm doing this on quite a tight budget. Partially my reason for this is that I see no point on buying expensive equipment that either I have no idea how to use (better cameras and lenses), or that does all the work on my behalf (goto-mounts). Of course you can get better photos that way, but where's the challenge? My plan is to learn things while doing this and getting better equipment when I definitely know what I need. Last thing I bought is a better lens: Canon EF 200mm f/2.8L II USM. After some testing this looks like a good buy.

Difference in my Andromeda photos were quite dramatic. 200/2.8L collects so much more light than my old EF 75-300mm f/4-5.6 III. Of course I started wondering how much better photos do I get from all the other objects I've already tried with my old lens. First thing that came to mind was Orion and M42. An awesome constellation for an amateur astrophotographer because there are so many different objects, some easy to see, some more and more difficult to even catch on camera.

One of the most fascinating objects to me is the Horsehead Nebula (Barnard 33) and I tried to photograph it as soon as I could. My first try was with the 75-300mm lens, and it was a disappointment.

As you can see, no Horsehead even with a good imagination. Flame Nebula (which I was totally unaware of before this) can be seen somehow if you stretch the image to it's limits.

The next ones are taken later that year with a better lens.

Here the Flame Nebula can be seen without extensive stretching and even the colors are about right. It's a single photo I took in November just before sky was filled with clouds. No further testing was possible. I didn't see the Horsehead back then but know that I know exactly where it should be, and if I use enough imagination, I think I can see it. Nothing spectacular though.

This one's been taken December 30th 2013. After couple of months sky was clear for several hours. Clouds came around 11pm, but there was plenty of time to shoot Orion from balcony, even after clearing the problems. I lost the colors while stretching the photo, but Horsehead is can now be seen without imagination. I had about 20 of these and the stack made with IRIS looks like this:

The Flame Nebula took me by a surprise. For some reason I wasn't aware of that before I saw it in the photo. While stretching the colors on this photo I decided I'll learn how to shoot proper flat fields. The background is so difficult to fix in postprocessing. It even shows in this cropped image.

I've concentrated too much on too small objects. Images of larger scale can be nice too and one can more easily use longer exposures. Too bad I don't have a good camera lens for that. Only the one that came with the camera. I set it to 55 mm and tried to fit as much Orion as possible on screen.

First I took a long exposure. I don't have a cable release and my camera supports exposures only up to 30s. There's Bulb-setting so I pressed the trigger for a while. From image exif I read it was 95 seconds. I processed the image on Darktable and here's the result:

I also took series of photos, 10x30 seconds, and stacked them with IRIS. Total exposure is more than 3 times of the one above, but I think I still like the single shot more. I'll better prepare my camera control set before the next clear sky.

I also took more shots of the Orion Nebula M42. I've photographed this a lot in the past, but of course my skills get better and sometimes my equipment too. This time I tried stacking with Regim instead of IRIS.

Level of visible details looks better than any of my photos before. Colors on the other hand are a bit wrong. I think what's green there should be blue. I'll have to try IRIS for the stacking as well.

Looks like Regim used the wrong Bayer matrix for my raw photos. When I manually set the correct one, the colors look the way they should look. 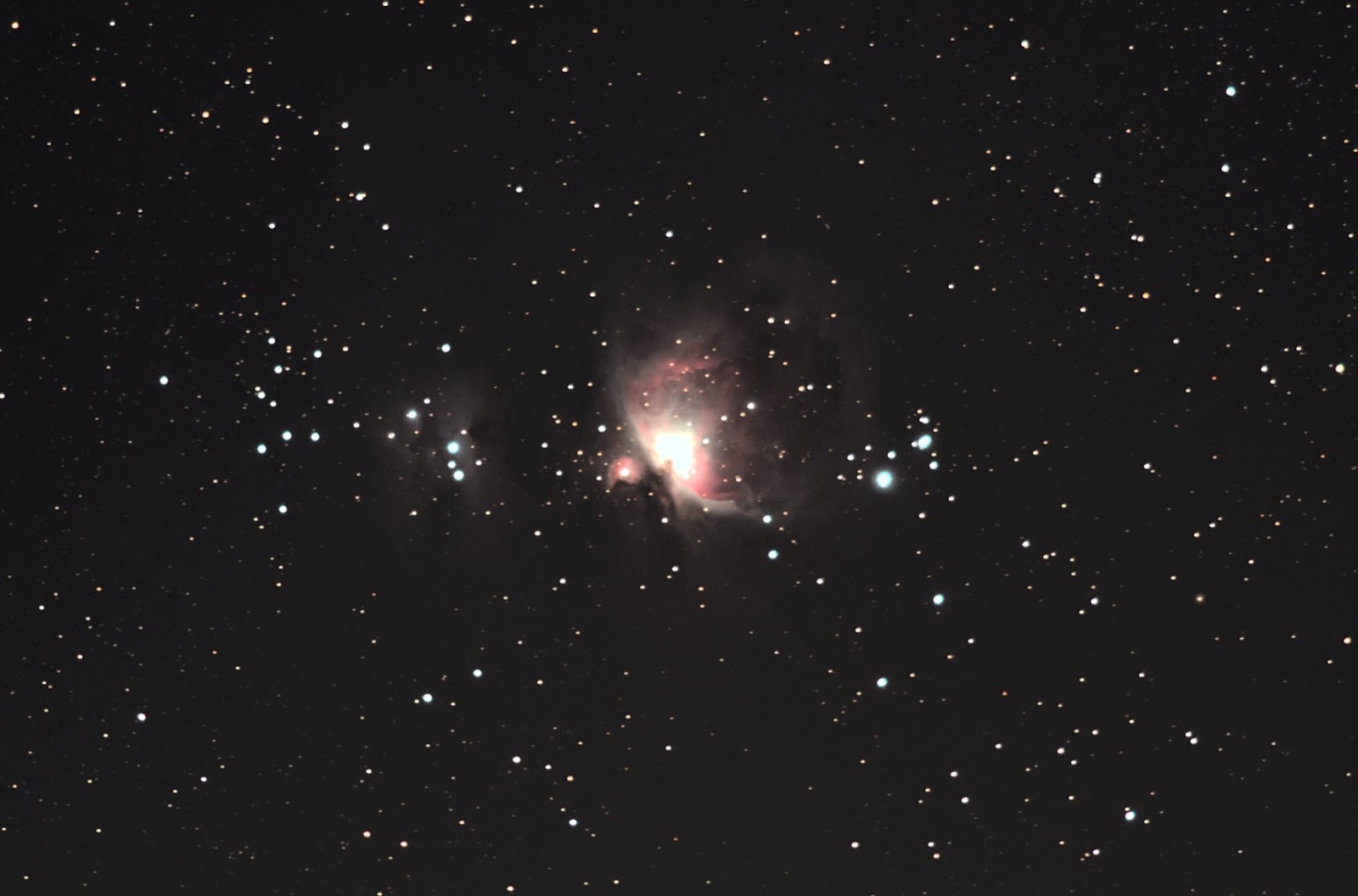 ...more or less. I'd still like some blue there. Even the single shots show some blue, so it's kind of strange the stack doesn't.

The same again, but now with IRIS. Finally I got the blue color I missed. 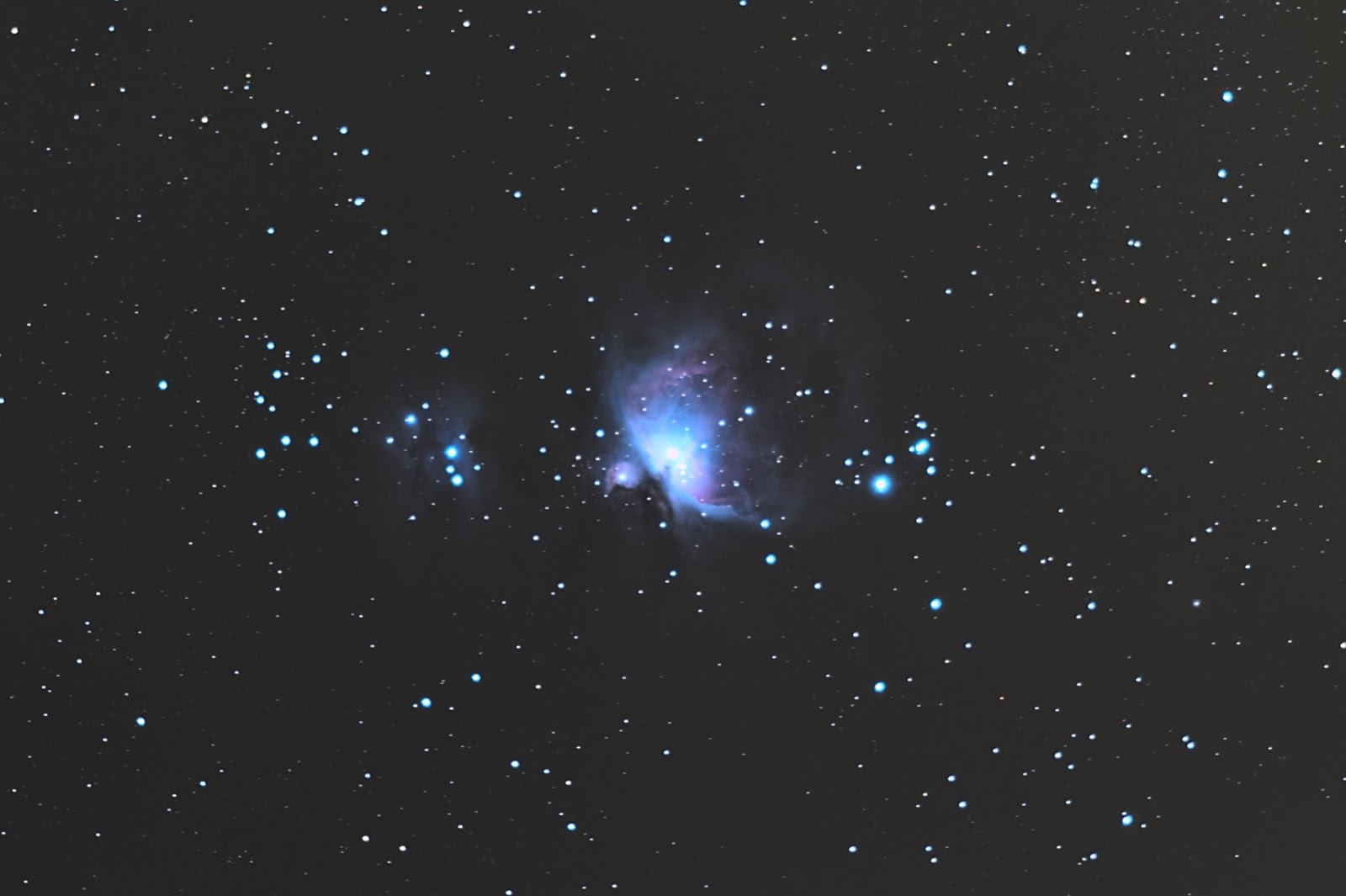 Posted by Unknown at 8:35 PM No comments:

Lately several of my astrophotos have had some sort of lens flares or other reflections. I've figured that they're from street lights or yard lights. After all I do most of my observations and photographs on my backyard. Usually these flares appear on the edge of photo so I won't have to worry about them. Couple of times they have surprised me though. 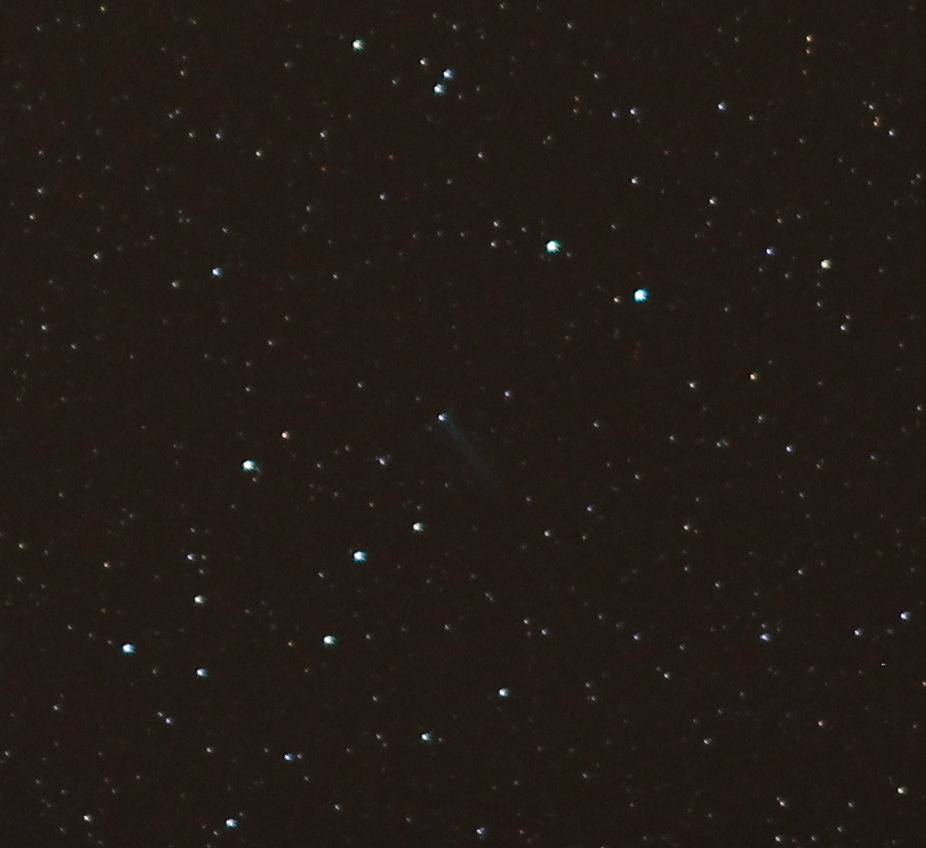 I was taking a panorama of Cassiopeia. That panorama didn't work (not enough overlapping), but there was this "comet" on one of the images. I immediately checked the other images as well and realized what this was. There's a star in a very convenient place to make the flare look like comet's tail. The next image had the same flare but the star had moved away from it.

I was testing whether I could photograph the Horsehead Nebula. I had the EQ-mount surprisingly well set. I could take 30 second exposures with 200mm, where I usually have to settle to 20 sec or less. Flare nebula was easily visible on camera screen so I started to take series of photos. Then I noticed this: 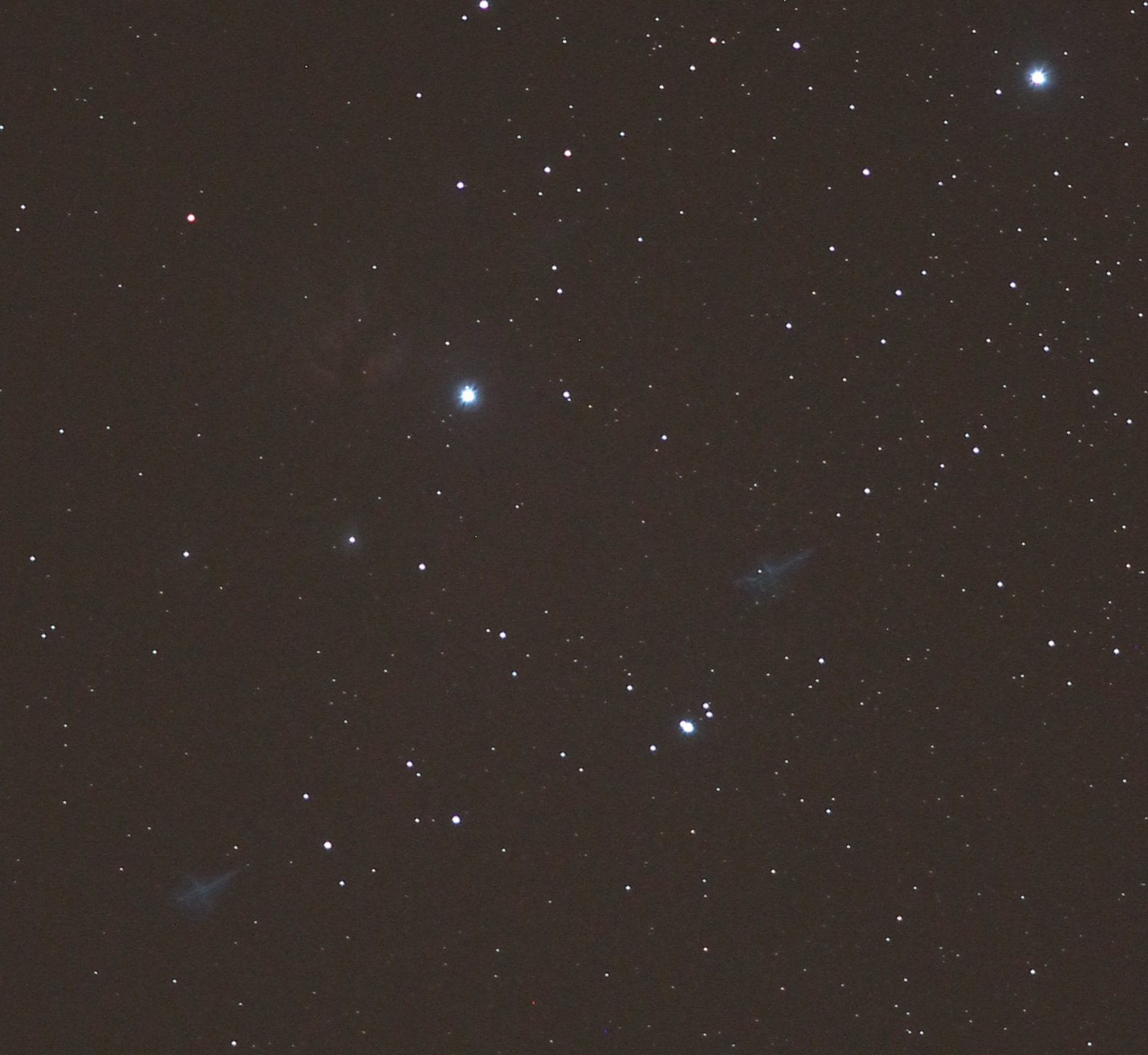 First of all, there shouldn't be anything like that on sky, at least on Orion. But now there's two identical! I was taking the photos on my balcony and there were some lights from neighbors that might find their way to my camera even though I had quite a long hood on the lens. I put some cardboard to block all light I could think of, but still the flares remained.

I zoomed and looked the image thoroughly and I saw a third one. Then I got it. Those flares weren't from lights around me but from the stars. The next image (click it larger if the small one doesn't show) explains it quite well. There are three flares and three bright stars. Moreover, the positions of the flares are exact π rotation of star positions. 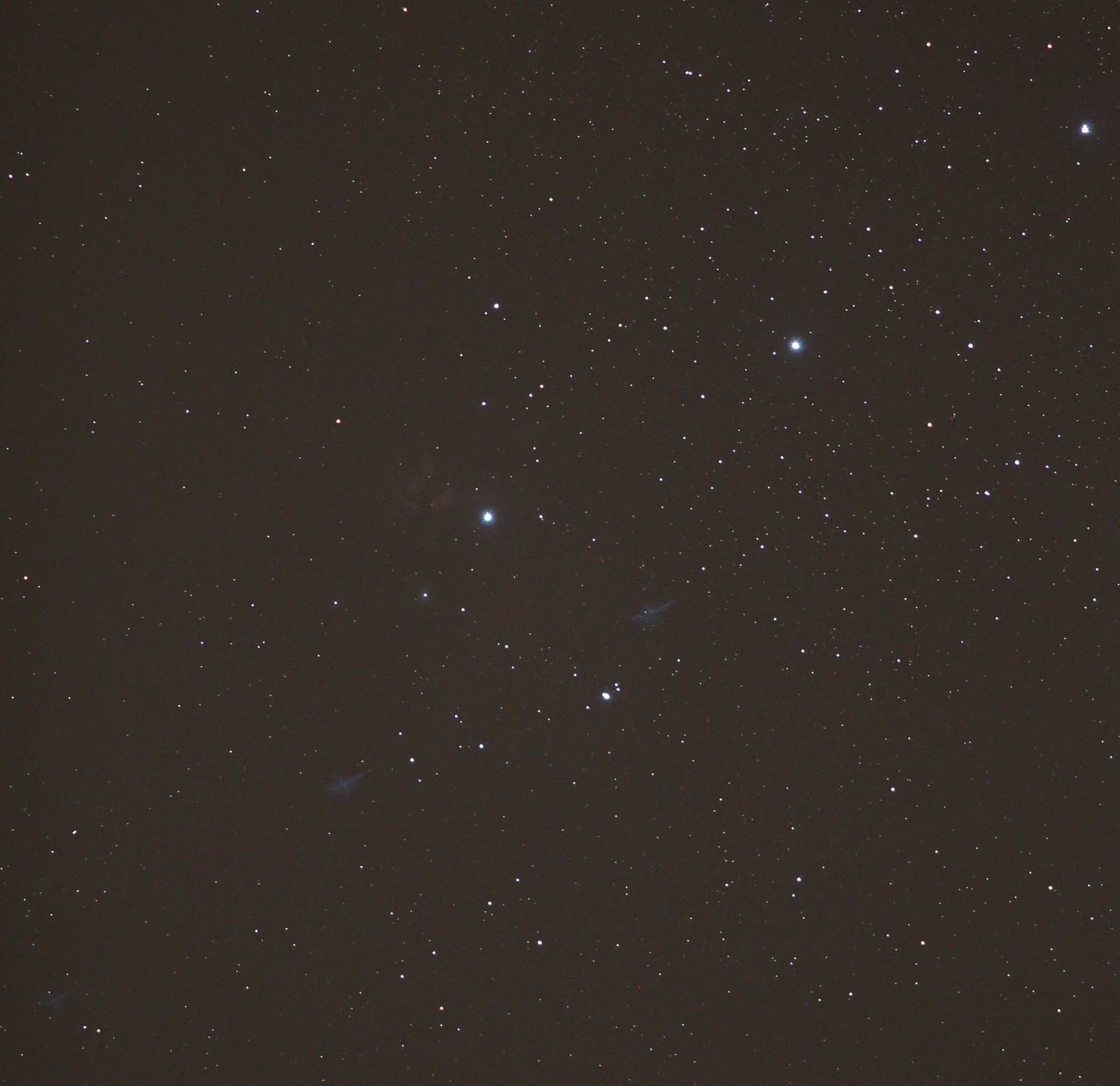 The flares were caused by UV-filter I had on the lens. I read somewhere that the filter does not affect anyhow on stellar photography so I've kept it on the lens to cover it. Looks like I have to remove it from now on. Without it there were no flares.
Posted by Unknown at 2:37 PM No comments: