As I recently wrote, I've been trying to learn AstroSurf IRIS. I've been doing everything on DeepSkyStacker until this, but the result always seems too colourless. Sometimes it looks like grayscale, sometimes sepia... But rarely the colours seem real. I thought it's just my lack of skills, but seems like not necessarily. IRIS and Regim do give me colours on the same data where DSS does not.

On a side note: IRIS works quite well with Wine on Linux. The drag & drop dialog for raw conversion does not, but it's possible to convert raws using the command line. First you have to place the photos on IRIS's working directory and name them by the same theme IRIS uses in everything. This time I copied all the CR2s to /media/data/Temp/iris and renamed them andromeda#.cr2, bias#.cr2, flat#.cr2 and dark#.cr2. Then you just

where "andro" is the generic name for converted image and 31 is the number of pictures. Same for flats, biases and darks, of course. From there on everything seemed to work just as in Windows.

Procedure is quite straightforward. You load lights, darks, flats and biases, start registering and DSS recommends the best settings for stacking method and else. The process takes a while and afterwards you have a "ready" photo. Of course there's still all the postprocessing do be done, but that I did in Darktable.

Procedure is even more straightforward than with DSS. You load lights, darks and flats (no biases possible) tell it to begin and after a while you have picture done. Usually the white balance is wrong but there are good automatic and manual tools for that. This time Regim's astrometrics recognized Andromeda and set the white balance correctly. Otherwise you have to set a B-V value
manually for some star in the picture. I've found these values in KStars, Stellarium or finally by googling stars name.

Regim also has an automatic gradient remover which works quite well, but as you see, I forgot to use it this time. Postprocessing was done in Darktable. I think I overdid the denoise on my first try. It looked too smudgy. Here's the second version.

IRIS has the steepest learning curve. I explained the procedure shortly in a previous post. Again the postprocessing was done in Darktable. This time I was more careful with denoise.

An 100% zoom of the three images. You might argue that DSS gives just as much detail than the others, but I just couldn't get more than that on Darktable. I tried not to mess with colour profiles on postprocessing and show colours the stacking software gave. Of course I adjusted RGB balance in IRIS and did automatic white balance adjustment on Regim. Seems like they don't agree on this. 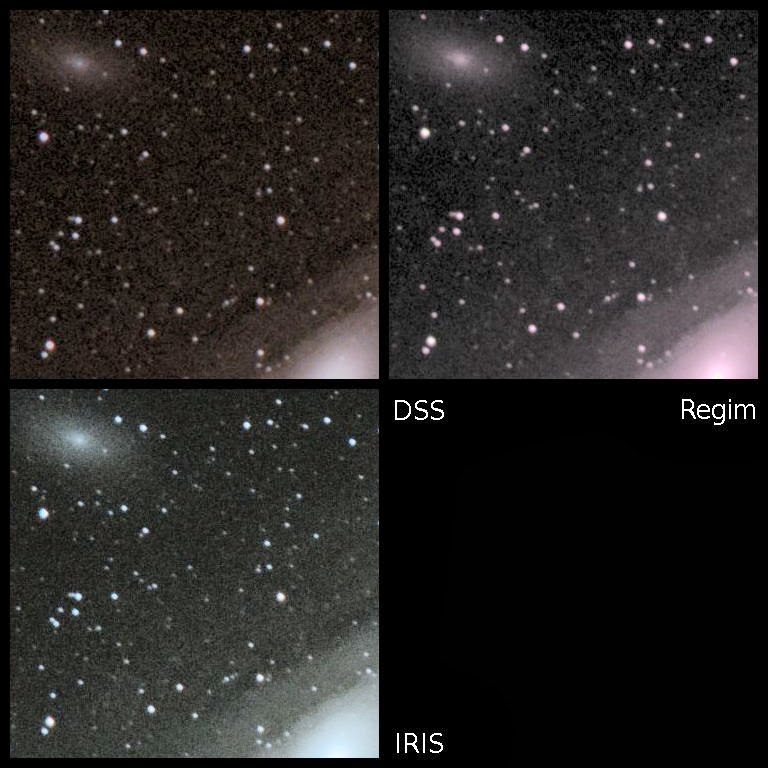 I like IRIS's colours the best. Level of details is about the same on Regim and IRIS. IRIS is no doubt the most difficult to learn, but while that, it also gives user a real insight on what's really going on in the stacking
Posted by Unknown at 9:25 PM No comments:

Now I've seen or photoed every planet on this solar system (except for Earth of course). Neptune was the last to be caught.

I was taking photos of Andromeda and while camera was shooting I watched stars with my telescope. Star chart showed that Uranus and Neptune are south and to that direction I have a clear view. I had already photographed Uranus so I aimed for Neptune. I probably saw it on telescope but didn't recognize the star like object for a planet. With camera I had more luck. Neptune was in an easy place middle of stars visible on naked eye. I pointed my camera there and took couple of shots.

Afterwards came the more difficult task of comparing images to a star chart. KStars didn't show enough stars so I tried Stellarium which that too showed only stars up to magnitude of 10. That wasn't enough to recognize which spot is Neptune. I fought with it for a while by adjusting settings and downloading more star charts... Until I realized Stellarium has to bee restarted to make it use those new charts.

Wouldn't realize it's a planet if charts didn't show it. No wonder Galileo mistook it for a fixed star. With enough imagination you might see some blueish pixels on top of the dot. Those might even be real colours if I managed to set the balance correctly on IRIS.

I still need photo of Mercury. Otherwise I have (some kind) photos of every planet. I've seen Mercury on naked eye and on telescope but at that time I had no camera to attach to telescope. Also my photos of Venus, Mars and Saturn are from a time before I had a Barlow.
Posted by Unknown at 3:04 PM No comments:

Seem like I'm starting to learn stuff about astrophotography since DeepSkyStacker is starting to bug me a lot. It's easy to learn and does something nice, but the results aren't that nice to work with further. Everyone seems to promote AstroSurf IRIS as a free (as in free beer) stacking software. It's not that easy though.

To use IRIS you really need to understand what happens in whole process of stacking. I read some ebook about it (can't find the link) and I thought I understood it but seems I didn't. I think I finally understood it after following this guide: IRIS:tä aloittelijoille (sorry, it's in Finnish).

If I understood correctly, here's how it goes:

I felt enlightened when I realized that. Maybe I should have read the ebook I mentioned with a bit more thought, or perhaps reading IRIS's manual would have been a good idea as well. Anyways this goes perfectly with everything else with my stargazing hobby. I tend to learn everything by doing it wrong first. 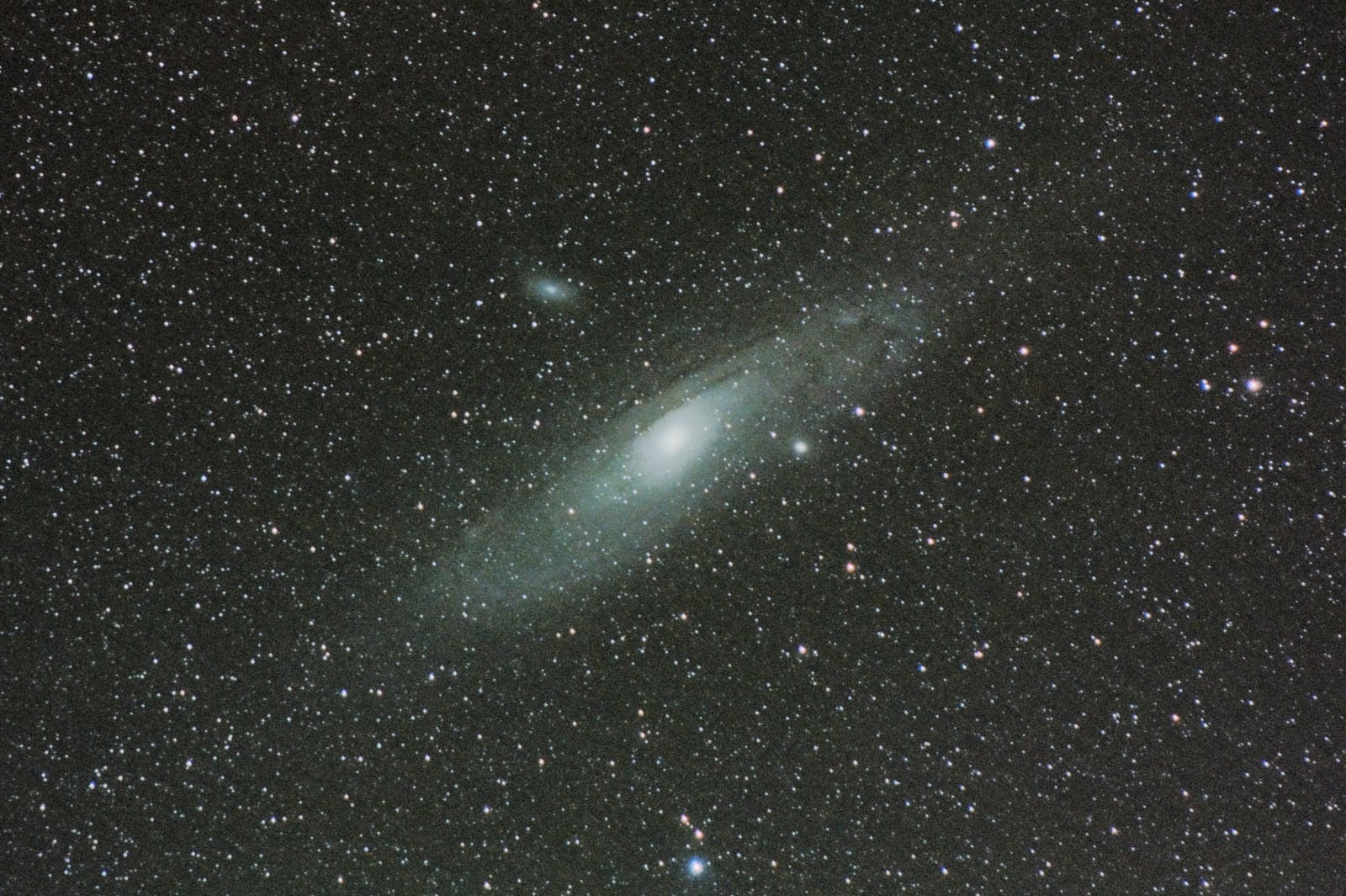 Andromeda Galaxy. M31, M32 and M110 of the Messier objects. I took 31 of 18 second exposures. 20 s made the stars trail a bit but on 18 it was unnoticeable. First one was to check everything is in order and then 30 more. Photos were taken on my front yard. Luckily Andromeda was in such a position that none of the streetlights was in front of the camera. I also looked at it visually and I really have to say it was the most I've seen of that galaxy. Quite beautiful gray spot on ocular. 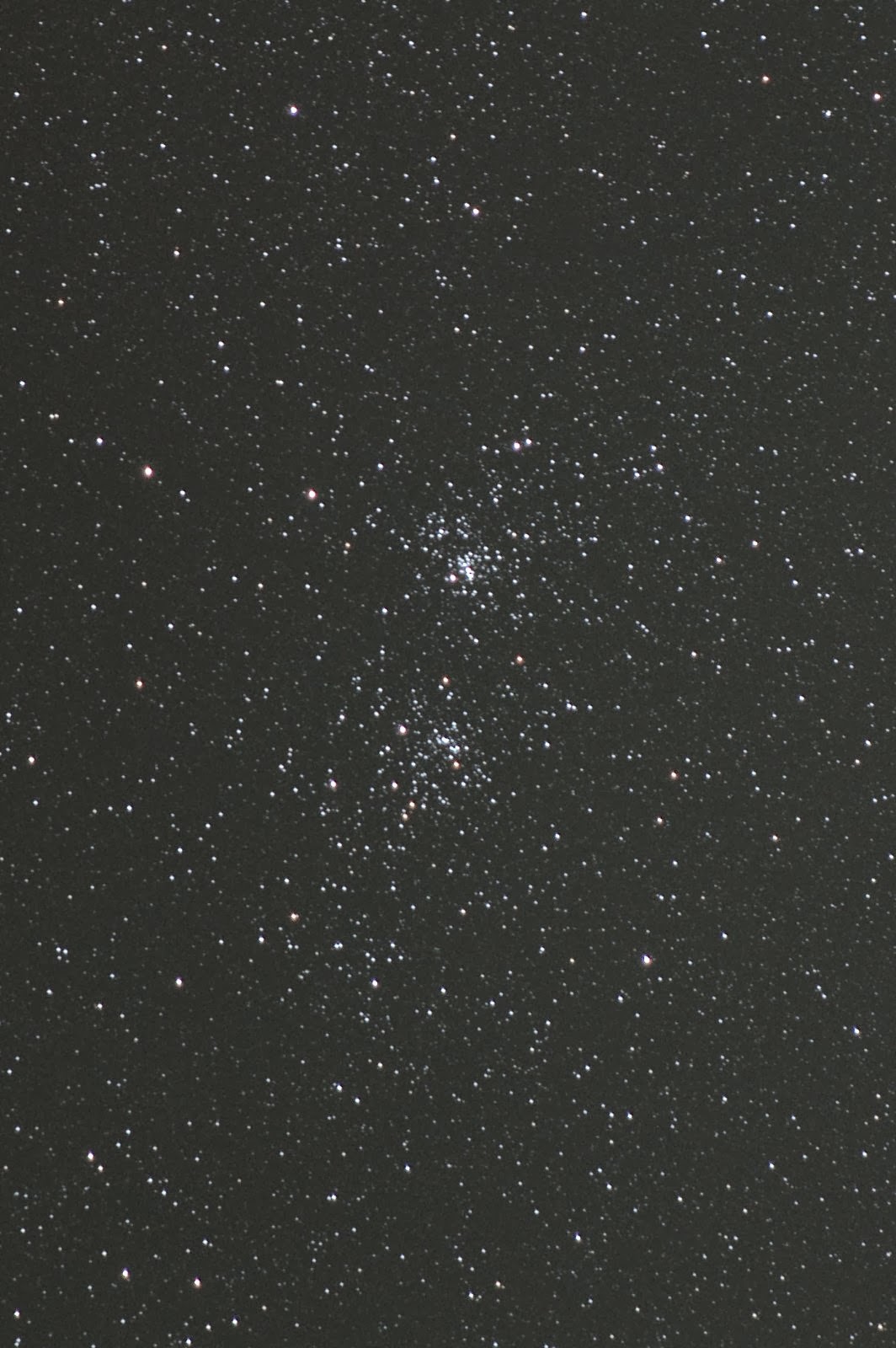 The Double Cluster: NGC 884 and NGC 869. While shooting Andromeda I looked through my 200 mm Dobson at everything I thought I might see. I realized I've never seen the Double cluster although it should be easy to find. It looked nice so after 31 exposures of M31 I took 30 of this. Same 18 second exposures than before.

Posted by Unknown at 4:29 PM No comments:

Test run on Raspberry controlled camera (and some nice photos)

I never got around to testing the camera controlling script I wrote on Raspberry Pi before now. I don't remember the internals of the script but luckily I made it extremely easy. I had Raspbian on a SD-card, I installed Gphoto2 and Gcc (required to compile usbreset) and took Raspi on balcony with EQ3-2 and camera.

It took me a while to set up networking (cable out of window) so I could control Raspi remotely but when I had it all set up, everything worked perfectly. I turned the camera to face brightest star I saw (Altair), focused the camera and took some test photos. Here's a single shot with 200 mm focal length, 30 s exposure time and ISO1600. Quite good considering I'm taking these in a city not long after sunset. 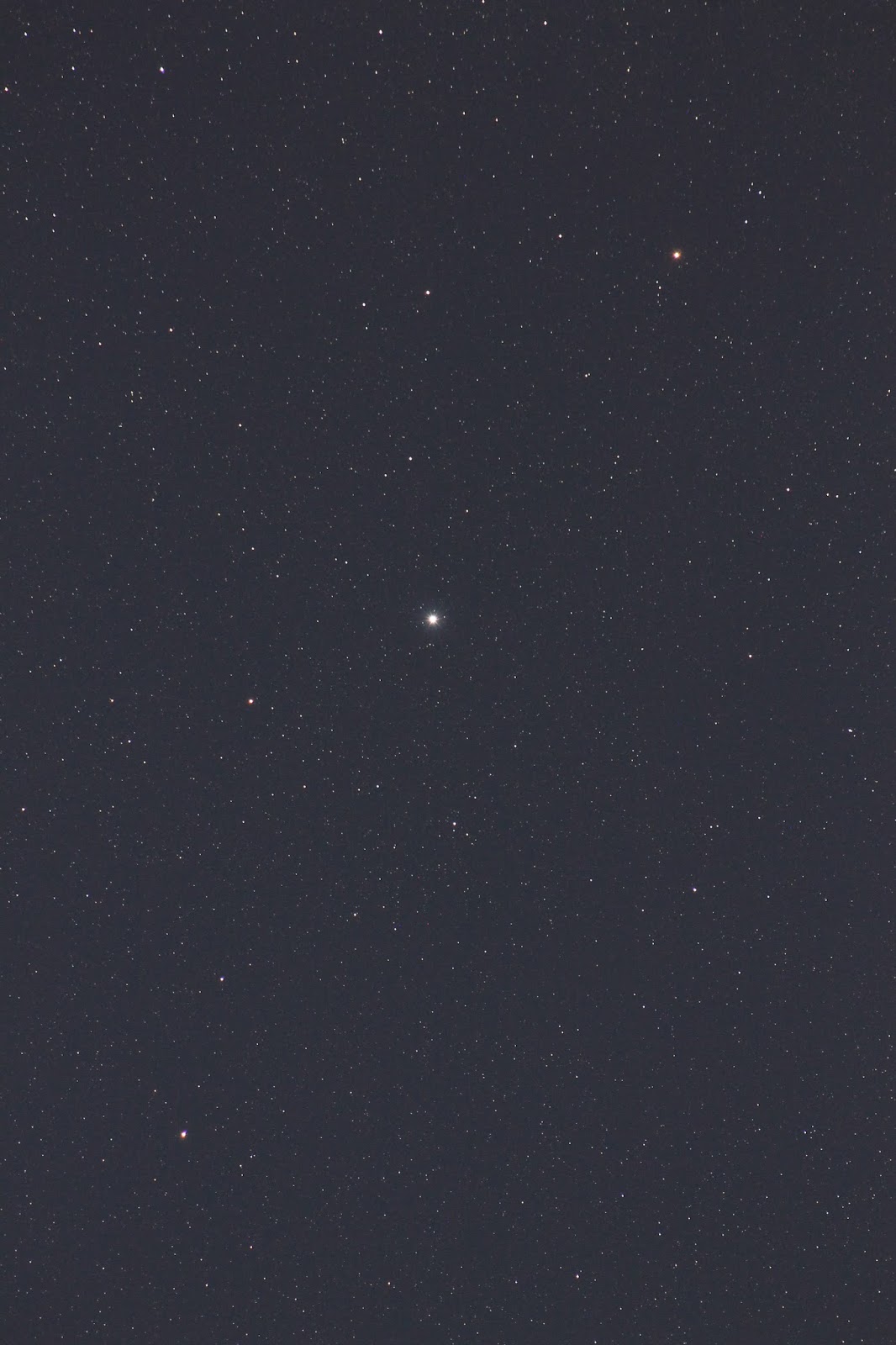 Sky was clear. All the crappiness from my camera.

I can't take too long exposures. With 200 mm focal length it seems 25-30 seconds is maximum. EOS 1100D can do that. Why this Raspi setup is nice then?
I'm considering of building some kind of system for Raspi to control EQ3-2's motor. Last night I had to get up, go out and turn the camera a bit. Come back inside and check results. Then the same again for n times. I've been told the motor on EQ3-2 is way too slow for this so perhaps I'll think some other solution... Anyways, to business:

From a star chart I saw that M11, Wild duck cluster, should be nearby my "calibration" star Altair. It was quite easy to locate the cluster and after couple of test photos I got it centered. Later on I noticed M26 is just a bit down and turned the camera there. It fit easily on same photo. Here's some results:

Last time I tried to upload a photo this size, Google automatically resized it so here's the original on Flickr if that happens. I also put this on Astrobin.

Nova.astrometry.net is a nice service of astrometric plate solving. The software is free, but I still haven't got around to installing it. It wasn't trivial. Meanwhile this service works. Astrobin also does the plate solving but for some reason it doesn't show me the annotations on full resolution image. That would be nice. Anyways, I got this from nova.astrometry.net:
Quite a lot in one photo. Some of those I cut in their own pictures: