Living near city lights makes it quite difficult for me to see deep sky objects. I see many, but has to be an excellent weather. Planets are a lot easier target. Lately Jupiter has been in a good position for viewing. I've also tried to take a lot of photos. One of which was quite a success (with my skills and equipment) because you can see the moons as well.

This is the first photo ever I took of Jupiter that didn't require any imagination to recognize the planet. Well... best of the hundred I took that night. But still just a single shot and a bit help from Gimp.

Planets should be photographed by taking a video and stacking that. I've found 3 software to do that. RegiStax, AutoStakkert! and AviStack. None of them is open source but AviStack should work on Linux once you succeed on installing IDL Virtual Machine. For some reason I can't make it work.

I took my Skyliner 200, 2x Barlow, Canon EOS 1100D and a laptop with EOS Camera Movie Recorder (which is open source, yay!). I recorded this video:


...or actually about 6 of those. They're all quite identical so no need to share them all.

With the same movie I tried four different stacking software. My skills with them are almost non-existent so this comparison is mostly about how well the programs do automatically. 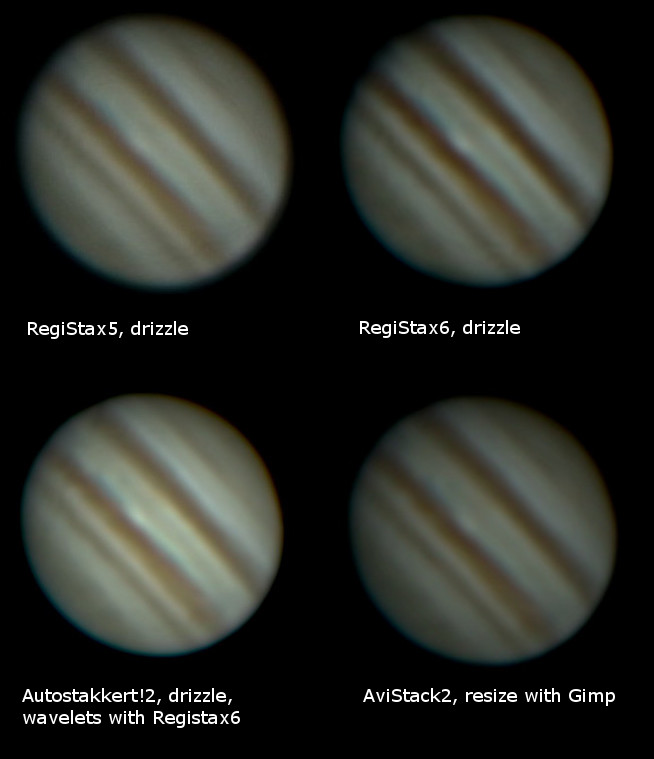 I used drizzle when available, but I have no idea whether that was a good idea. I'm quite sure there was no need for it, but I don't know if it did any damage. This need more testing.

Autostakkert was perhaps the most automatic. It also did the best job although there was no wavelet sharpening. I did that with RegiStax6. The result is a lot better than the image that's also stacked with RegiStax.